It’s been quite a while since the last blog post so I thought I’d start with a quick re-cap of what we’ve been up to.

Okumachi Sensei Kata Course (Wed 3rd Nov) – this was really good. Sensei Amy & Carl travelled down to Alfreton on the Wednesday evening after running the After School Club. We were always going to arrive their late, and after a detour to the Derbyshire Denby factory got there in time for a couple of hours of great technical kata training. Well worth it…!

EKF Coaching Course (SAT 13th Nov) – Hartlepool Wadokai hosted this course, run by Sensei Harold Stephenson of TASK. The course is a requirement for ALL English Karate Federation registered Karate Instructors and is (as far as I’m aware) the only Karate specific coaching qualification available in England. All five club instructors passed the course as follows:

I’d like to thank Harold for a very good course, the other club instructors for turning up and of course the Hartlepool Wadokai students that supported it by turning up and letting us ‘practise our teaching’ on them.

Askam Karate Club (21st Nov) – Sensei Carl & Amy were once again invited to Askam-in-Furness to run a short course for the Askam Karate Club. This was the best attended event so far and everyone was great. Afterwards we had a tour of the lake district before heading back. 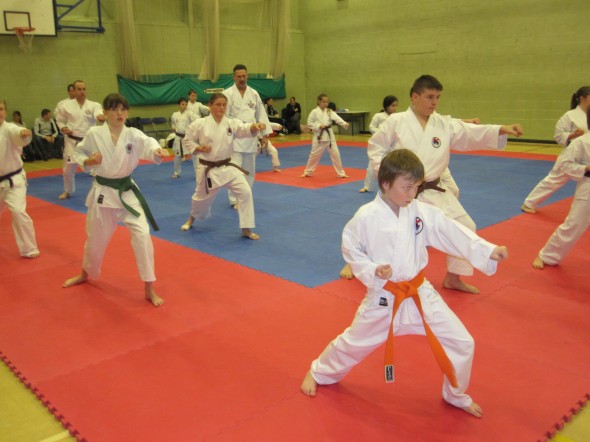 This weekend had the fantastic support of most Aiwakai clubs from across the country, despite the ‘worst weather in 30 years!’. The course was action packed with a Grass-Roots Kumite Squad with Sensei Keith Walker, Referee Training with Sensei Vince Parker and Traditional Karate training with Sakagami Sensei, Sensei Peter May & Sensei Lee Minion, and of course the Dan Test and Party/Social/Awards evening.

At the awards evening 3 of the Hartlepool Wadokai instructors were presented with their 20 year Karate Service Awards by Sakagami Sensei (Sensei Lynne, Michael & Carl Jorgeson).

Roy, Luke, Jas & Connor also passed their next Kyu Grades in front of Sensei Peter May over the weekend.

On behalf of the club, I’d like to thank EVERYONE who made it through the snow for the weekend.

This entry was posted on January 24, 2011 by hartlepoolwadokai. It was filed under Uncategorized .