Today we held our End of Year Training course followed by our Kids Christmas Party to finish off a very busy, but very successful year for the club. We had 44 students turn up for the free training course and a staggering 92 kids (& a stack of parents) for the party! By far the best attendance we’ve had for a club event so far.

I’d like to personally thank the instructors, students, committee, parents and volunteers for all their hard work and dedication over 2011. Also, a massive thank you to all the parents who donated raffle prizes and last but not least, to George Gowland for another great Disco (accompanied by Luke & Nick’s band!).

This course has became something of a club tradition since Carl & Amy came back from training in Japan, with the course content being copied from Arakawa Sensei Shiramizu dojo’ End of year course.  After a thorough warm-up led by Sensei Amy, all the students completed a mammoth 1000 punches (of various types) and gruelling 1000 kicks. The Pee Wee’s especially showed fantastic spirit throughout! We finished off the session with a few Kata and a group shot (minus instructors).

We held this party in a big sports hall because we had so many kids coming along. The Disco was provided by George Gowland (Tel: 07970 697779) and he was accompanied by Luke & Nick’s band, who played a 30min set to finish off the party. Catering was provided by Sensei Lynne, Michelle Butterfield and few other dedicated parents (Vicki, the flap jacks were my favourite {hint hint}).

During the party we also gave out a number of awards:

In addition to the above dates, some other events might be added (e.g. British) depending upon squad commitment to training and ability. Competitors wanting to select for the Wadokai England Squad in 2012 should put ALL of the above dates into their diaries.

Those students ‘serious’ about competition should attend the weekly Squad Session (Wednesday 7-8pm).

Tonight we carried out a number of sport science tests on our competitors. These tests form part of Sensei Carl’s ‘Analysis of Sports Performance’ module in his Sports Coaching & Exercise Degree at Hartlepool College Of Further Education.

The tests were as follows:

The ‘illinois agility run test‘, Power on an electronic shield with Gyakuzuki (reverse punch). And finally we recorded a number of kumite matches from each fighter. This will be analysed by the clubs referee’s over the holidays for favourite techniques used, scoring techniques, movement patterns etc… and areas of improvement.

All this data will be used as part of the 2012 squad training program for our competitors.

(Special thanks to Mikaela White for working the video camera) 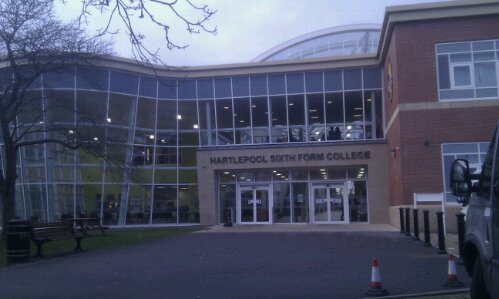 For the past six weeks we’ve been running a Self Defence course for teenagers at Hartlepool Sixth Form College.

All the students involved took to the program very positively and we were able to progress through very basic one-to-one scenarios through to dealing with groups.

We spent a lot of time working on overcoming the initial ‘flinch-freeze’ response when under pressure coupled with various body manipulations and strikes.

We also covered ‘Awareness & Avoidance’ and the ‘Fight or Flight’ response.

In all it was a good introductory course and will hopefully give the attendees more confidence.

We’ve given each of the attendees a free months trial at our community classes for January so we hope they take up the offer.

Today Amy and Carl had the (dis)pleasure of taking part in some fitness tests at Teesside University. These formed part of Sensei Vince’ final year of his Sports Coaching & Exercise Degree. After a brief warm-up we worked on a bike which was hooked up to a computer which gave incremental resistance for a shattering 30 seconds. Our legs felt like jelly afterwards. Next was a ‘sit & reach’ test, grip test and as the photo above shows a vertical jump test.

We’ll publish  the results on here when we get them.

A number of other club members are also taking part in the tests over the next few weeks too. It will be interesting to see the final results.

Tonight we had a Club Grading at Owton Manor Primary School. We’re pleased to announce that everyone was successful and most are now the proud owners of shiny new belts just before Christmas!

We had the students have a serious pose and then the ‘Karate kid’ pose :-p

Hartlepool Wadokai’ last Karate session of the year will be Wednesday 21st December. Classes will resume as normal from Friday 6th January 2012.

Sunday 4th December, Aiwakai FREE members course, Alfreton Leisure Centre.
This is a free training course with Sakagami Sensei for all Aiwakai licence holders. All club members are welcome to attend the course (take your licence with you) but you will have to make your own travel arrangements. Also, please inform a club instructor before attending.

Monday 12th December, Hartlepool Wadokai Club Grading, Owton Manor Primary School, 6-8pm
All students with the required number of tags will be able to grade provided their attendance has been sufficient. An ‘application to grade’ form must be completed.