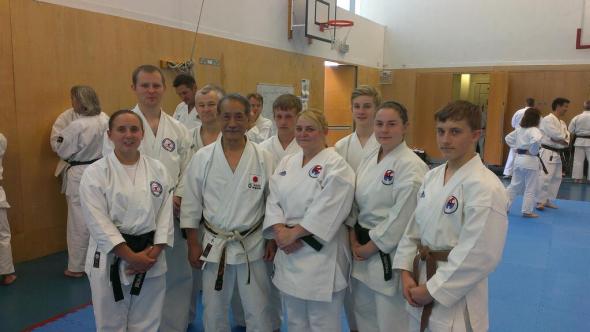 The JKF-Wadokai is the ‘internationally renowned’ parent organisation that oversees Wadokai Karate. 8 members of the club recently attended the UK Master’s Course headed by Matsui Sensei and Takagi Sensei. To my knowledge, this is the first time so many of the high ranking Wadokai sensei have been to the UK. The visiting instructors were as follows:

Mr Yoshinorio Matsui Chairman of the Board of Directors

These sorts of big events are a great opportunity to catch up with old friends from all over the world, and of course make new ones. Amy and I met up with quite a few people over the weekend who had at one time or another visited Takamasa Arakawa Sensei’ Shiramizu Dojo in Sugito Japan. One of these friends rightly described the course as a ‘facebook convention’ because it really was, we’re all connected online to so many Wado friends and colleagues and these big events bring everyone together to train under one roof. It was great to be able to meet some people who we’ve been connected to for years without ever meeting in person. 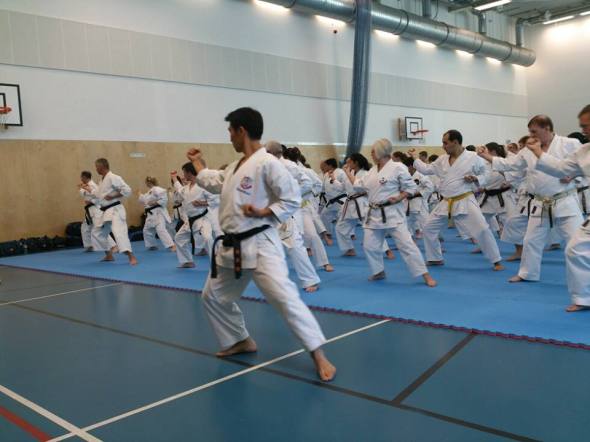 Over the long weekend we covered basics, basics and basics of Wadokai. Takagi Sensei explained a number of times that the fundamental movements are essential to move and strike correctly, and without solid basics, nothing else will work. It was effectively a standardisation course with the Sensei highlighting the key points of each movement. It’s important that all Wadokai clubs are teaching the way the JKF-Wadokai want us too, throughout the world and that we’re all continually developing ourselves to ‘become the best we can be’.  The pace was at times tough, with calls of ‘faster faster’ reminding me of my earlier years in Karate.

Bob Nash Sensei (USA) was on hand throughout the weekend to translate and helped ensure everyone understood what was being said, often in a humorous way. 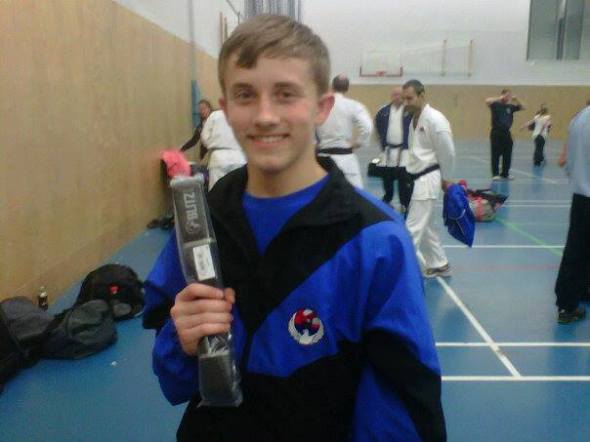 We’re pleased to say that the club had a successful weekend with the Dan Grading (Black Belt Examinations) with Lewis Muldown achieving his 1st Dan, Beth Gray her 2nd Dan and Carl Jorgeson his 4th Dan.  All the attendees were also given attendance certificates to remember the prestigious event so we presented them last night at the club.

The course was very well attended with up to 200 students descending from all over the world. Hopefully this support will lead to more events of this type taking place in the UK, there is obviously a desire for them. This can only strengthen the Wadokai in this country and beyond. 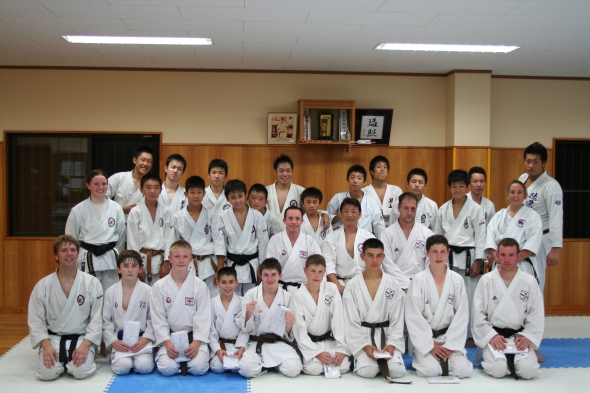 Tonight Amy and I took 15 of the Wadokai England entourage up to Sugito to train at Shiramizu with Takamasa Arakawa Sensei. We had to take the train in two waves because some of the guys were delayed getting to the hotel, I sent Amy on ahead and I brought the rest of them with me… By total chance, we all somehow ended up on EXACTLY the same train that pulled into KUKI station for the transfer on the Tobu line to WADO station.

It was a scary sight, and one that has never been seen in the sleepy Sugito town before – 15 foreigners strutting along… all heading in the same direction, to the Shiramizu dojo. We turned up just in time for the start of class and we were all greated like old friends, and some bemused smiles before the guys quickly got changed for the start of the class. The dojo isn’t very big so I was pleased with the warm welcome that we received. I must admit, I was embarrassed taking so many people at one time since we effectively took over the dojo.

I’m still out of commission with my knee, so I got to compare the English with the Japanese, I must say that there wasn’t much in it between the cadet/juniors in the kata. It was a really good session, led entirely by Arakawa Sensei himself. I think Arakawa Sensei spent sometime ‘sizing up’ the various cadets & juniors during the basics and foot work drills – because let’s not forget, they’ll be competing against each other at the weekend. The session moved quickly onto Kata, with groups of students performing a number of kata at a time. This quickly becomes a mental endurance game due to the heat and humidity. All the students fed off each others energy and it was great to see our Kata guys performing on par with Shiramizu. The session finished with line / partner fight drills against a partner. 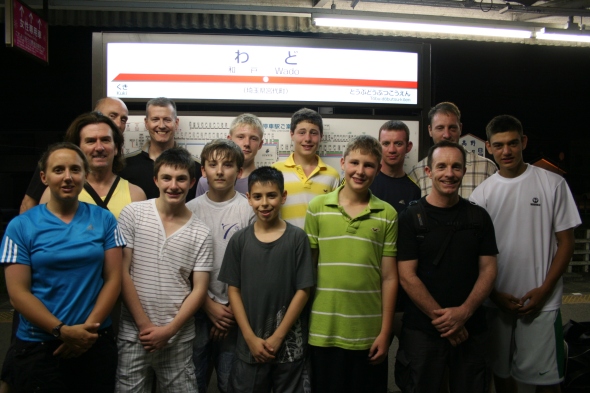 The entourage on the platform at ‘Wado’ station after training

Arakawa Sensei’ great sense of humour and friendliness came across instantly in the class and as usual everyone worked very hard, but had a great time doing it. The Shiramizu team didn’t want to be out done by the English and vice versa, so the atmosphere was great with everyone working that little bit harder. Sensei also had a chance to practise his English too.

Arakawa Sensei said a few words and asked me to translate, I paraphrased and thanked the England Team for training at Shiramizu and said something like ‘it’s good practise for everyone who’ll be competing at the Wadokai Nationals at the weekend’ and wished everyone luck. Sensei cracked a small joke at my expense explaining that Amy studied tons of Japanese whilst on the internship whereas I didn’t… I explained in my best Japanese that I was very busy… 🙂

After the session everyone was presented with a special ‘Wado’ face towel and keyring, we took a couple of group shots and everyone hung about for a while practising their English and getting to know each others names. We them headed back to the station for an eventful trip back to Ikebukuro where I got to practise (and totally blag!) a number of conversations in Japanese with the station ticket masters.

It should be noted that Jamie Jewell Sensei & all his group had only just got back from climbing Mount Fuji – the biggest and most famous mountain in Japan when we set off for the Dojo. No rest for the wicked!

On Tuesday, Amy and I took Nicole, Abby & Aaron (Kobukan Darlington) but Sensei was running a pre-belt test examination straight after the lesson so we all forgot about the group shot BUT I did get this one: 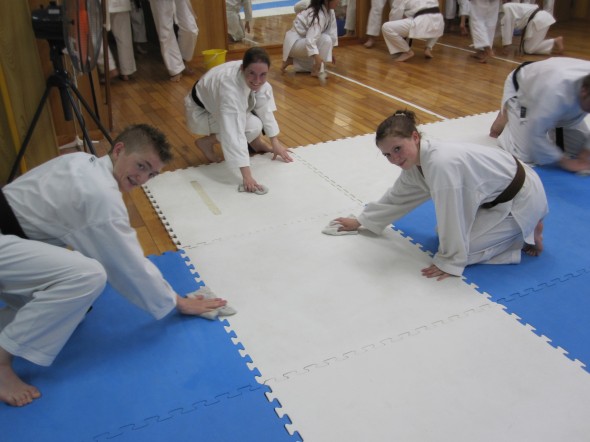 Thank you Arakawa Sensei and Shiramizu for letting us all train… we’ve all had  a great time!

Amy and I spent a year living in Japan from July 1st 2008 until July 1st 2009. We worked as the shiramizu interns, I ran the English language classes at the dojo and we both taught English for other companies in saitama and Tokyo.

Sensei Takamasa Arakawa is the owner of the dojo and anyone that knows him, or even knows of him will tell you that he is a fantastic wadokai technician and he’s also a genuinely nice guy.

The reason for mentioning the dojo?
at the upcoming Wado World Cup there will be at three former shiramizu interns competing (Louise Fisk – New Zealand & myself and Amy – UK). there is also another WWC competitor from Germany who is currently training at the dojo in preparation for the competition. This shows how special shiramizu is and how highly regarded Arakawa Sensei is internationally.

At the JKF-Wadokai Nationals, Shiramizu will no doubt have a massive club presence alongside fellow Englishman Pete Williams (the current intern). Shiramizu are often asked to do demonstrations at the big Karate events so I’ll have my video camera on standby.

Needless to say that Amy and I, and no doubt Louise will be visiting Shiramizu when we get back to Japan. I’m hoping to get as many of our Wadokai England team there as possible so that they can experience the ‘shiramizu magic’…

…Getting ready for Japan

For the last two year’s or so, long before we headed out to Japan for a year, Amy and I have been focussed, almost exclusively on being selected for the Wado World Cup. I’ve never been selected for this event, the first time around i’d only just started competing and in 2005 I just wasn’t good enough to make the final cut for the Wadokai England Team. Since then I’ve got a lot more experience, trained with some of the Karate greats and spent a year getting ‘good wado’ beaten into me in Japan. After all this i think I can now hold my own in most matches…

The big surprise obviously was getting selected for Kumite and Kata in the first place. We didn’t start competing in Kata until the 44th JKF-Wadokai Nationals in 2008. So, if you’re any good at maths, you’ll realise that come the World Cup, we’ll have been competing in Kata for only two year’s. Kumite, I’m ok with, I’ve always been comfortable fighting, but Kata…. that’s entirely a different story. 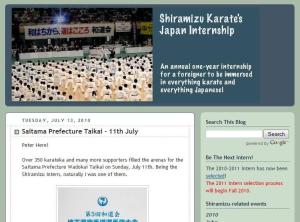 Anyway, because we head back to Japan in 4 weeks, I’ve found myself following the Shiramizu Japan Karate Intern Blog. The new Intern, Pete is English and he took over from Louise & Erica (who took over from Amy and me). I particularly like his personal blog which always gives a truer picture of what it’s really like over there because the main intern blog is censored to be politically correct. 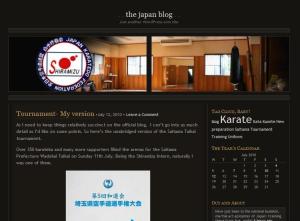 I would definately recommend checking out both blog’s from time to time as they give a great insight into what it’s like to commit to a full year training intensively in Karate IN JAPAN. This is exactly what Amy and I did from July 1st 2008 – July 1st 2009.

Anyway, I’ve got to get back to training…. there’s a lot of work to be done before August!